Florence is one of the most beautiful cities in the world. It was the centre of the renaissance and today holds some of the period’s finest artwork.

The only drawback to Florence is the tourists. They are simply everywhere and, quite frankly, ruining the city. Now, I am aware of the hypocrisy of lambasting tourists whilst having visited the city as a tourist myself, but I’m afraid all tourists were not created equal. 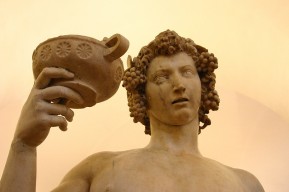 Behold Michelangelo’s Bacchus, the Roman god of wine, a housed in the Bargello
museum. His inebriated slouch and lolling head represent an early indication of Michelangelo’s intrinsic understanding of posture and  the subtleties of the human body. I was lucky enough to view this piece, completely alone in an empty gallery, on a Saturday morning last week.

The next day, at precisely the same time, I had to queue for over an hour to see his later work, David, and herein lies my issue with other tourists. Whilst David is indubitably a beautiful piece, it isn’t the only one in Florence worth seeing. The absence of these same tourists at the Bargello, or the Galileo museum, just goes to show that they are constituents of what is referred to as ‘post-tourism’ – going somewhere for the sake of saying you’ve been there.

An even more obvious example can be observed at the Louvre – one of the most impressive collections of artefacts anywhere in the world, yet the majority of visitors congregate around the Mona Lisa, ignoring the other exhibits entirely. In the Uffizi gallery, one can encounter the same effect: the busiest area, by far, is the room containing works by Leonardo da Vinci, yet the Botticelli masterpieces are unobstructed.

Having seen these effects, we can conclude that this particular kind of tourist has no idea what they are looking at, they are just vaguely familiar with a famous name and therefore feel the need to take a selfie in front of one of their works. It’s infuriating.  If you do not visit your galleries and exhibits at home – why do so abroad? Why obstruct other’s enjoyment of such things, when you have no genuine interest beyond telling your friends—no doubt via Facebook—that you have been there?

The Answer? Don’t. Taking a selfie next to the Mona Lisa won’t change the fact that you are a troglodyte; be honest, you’d enjoy yourself far more in ‘Beefa’. Never go to a location because you feel like you should. Go because you have an  interest in what the place has to offer and want to genuinely broaden your horizons. Otherwise, just go to Benidorm and stop ruining the ambience of more refined destinations.